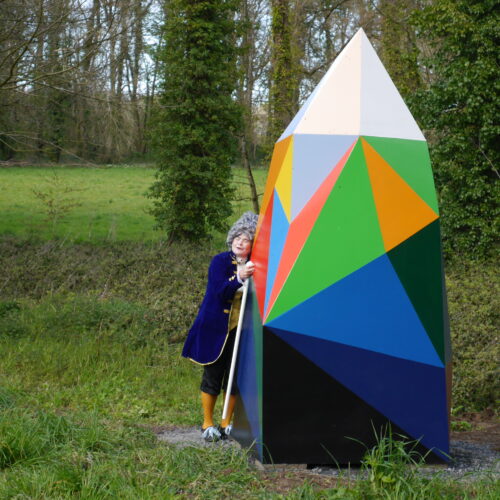 The Fantasy of the Marquis, by Jean-Marc Nicolas

There are no major legends linked to Château de Trébodennic, apart from the story of this turret which is said to be indestructible. It could have disappeared at the beginning of the 19th century, when the owner at the time decided to demolish the building. But during his work, the demolish man had a bad fall which proved fatal and the turret survived!

The squire rarely climbed ladders, leaving it to his people. And so it was his demolition man who died, which shook him to the core. His fall and agony haunted the Marquis’ nights and obsessed him all day long… He could not forgive himself this fatal destructive desire. His reason wavered; he implored the sacred stones of the whole country to come to his aid (these erected stones represented for him the symbolic counterpoint to the demolition of the turret).

Spending a day, devastated, in front of the cult stone of Ploudaniel while returning from an afternoon spent crying on the lying menhir of Prat Ledan, he had a vision that brought him out of his lethargy. He was going to build a monument to this poor demolition man with his own hands: a tribute to the remaining château, the miraculous turret and all the menhirs to which he now devoted a remedial cult. A cheerful, colourful, luminous monument, a union of earth and sky, a symbol of the benefits of construction and his new-found joie de vivre.

The Marquis therefore wanted what he cheerfully called his « fantasy », somewhere between a place of devotion and a garden folly. His project was very simple: to add a château, turret and menhir, and what came out of it was his fantasy. The Marquis’ Fantasy today stands at the entrance to the park, so that no one entering the premises can ignore this fatal adventure.

This artistic project reinvents the legends of our regions and offers hikers a truly artistic route. At a rate of two works per year, here is an original way to discover the local heritage while stretching your mind and your legs!

Built around 1584 by Alain du Poulpry, Canon of Léon and adviser to the Parliament of Brittany, the château and its outbuildings were sold as national property after the Revolution.

Of the original building, the main building with the corbelled turret and Renaissance-style door (listed as a Historic Monument in 1932) have been preserved. The rest of the building dates from the 19th century.

The Fantasy of the Marquis by Jean-Marc Nicolas

Jean-Marc Nicolas is an artist, graphic designer and landscaper living in Saint-Hélen, in the Côtes-d’Armor. His sculptures, evoking architectural archetypes, invite the viewer to take a stroll.

With his colourful « fantasy », the artist celebrates the architecture of Château de Trébodennic, a symbol of the preservation of local heritage, witness and messenger of all these stories and legends of the past.

The work of Jean-Marc Nicolas is located near a 13.6 km hiking trail (green markings) starting from Ploudaniel town hall and passing mainly through the Langazel wetland. Hiking sheet available at the tourist information offices of Tourisme Côte des Légendes or at www.cotedeslegendes.bzh.